Rain overnight and clearing conditions this morning promised some excellent spring birding on the Mountain today. With a good chance that large numbers and many species of birds had “fallen-out” on their overnight migrations, it was time to head up the hill and do some birding around Centennial Park and the surrounding forests. 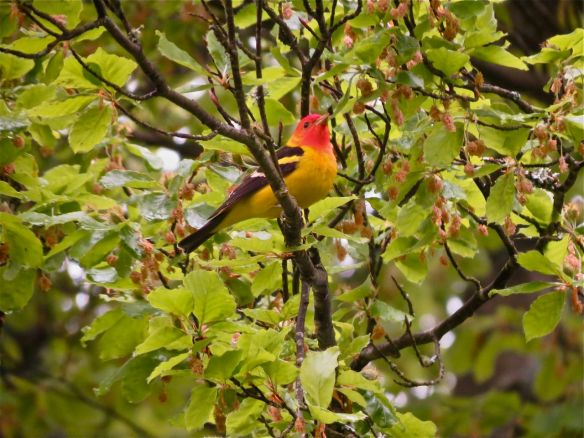 The Western Tanager is a spectacular neo-tropical migrant. Despite its bright colours, it can be virtually invisible in a leafy, green tree. Many people are surprised to learn that it’s fairly common here, and breeds widely in Burnaby parks.

Locations like Burnaby Mountain are magnets for these weather-affected migrating birds. Known appropriately as migrant traps, these special places are at their most exciting during spring and fall migrations. Other well-known migrant traps in Metro Vancouver are Queen Elizabeth Park and the tip of Point Grey, Vancouver.

Where there’s a geographical barrier, such as a body of water, or where a height of land pokes up through a city landscape, birds find refuge, and the chance to feed up and rest, before continuing their long distance flights. Burnaby Mountain is on the edge of Burrard Inlet, lies just before the North Shore Mountains, and rises above the city. All good features for attracting migrating birds.

Yellow-rumped Warblers are our most common migrant warbler. Like this one, they frequent tree tops, foraging for insects and insect larvae, which makes them a little tough to photograph.

With a many colourful birds like the two above to grab my attention, I was soon enjoying spring migration in full swing. Not only were there warblers and tanagers, but flycatchers  were also announcing their arrival with a variety of songs. A loud, Quick Three Beer whistled from the top of a conifer confirmed the presence of an Olive-sided Flycatcher, surely one of the easiest songs to remember, even if you’re a wine drinker. Click here for a sample song.

Our more familiar birds, like the American Robin, are very common on the Mountain, and at this time of year are in full voice. When you are standing in one place, songs can be heard coming from all directions. Some birds are migrants, while others already have their first nests in the forests, and forest edges. Even our common birds are worth a second look.

And while on the topic of resident birds, we have a very special one on Burnaby Mountain. In Metro Vancouver, on this side of Burrard Inlet and away from the North Shore Mountains, Burnaby Mountain is the only place I know where the Sooty Grouse can be found. They breed here, and if you’re lucky enough, and make a careful search, you may be fortunate enough to see of one of the most sought-after bird sightings of the Western Mountains.

Today I was lucky enough to see three, and even luckier to get extremely close to a couple of females. All I did was squat down, stay still, and with my camera ready, let them walk right past me. 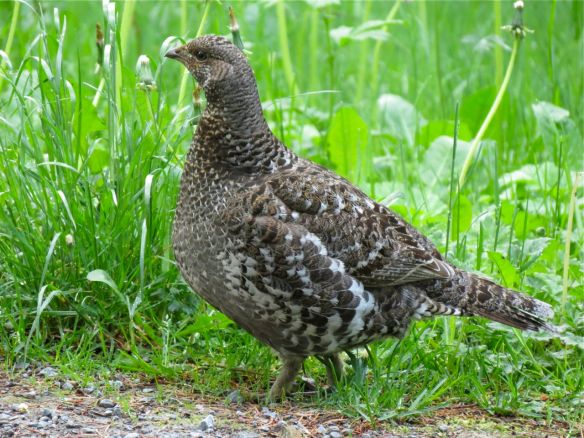 Female Sooty Grouse. Speckled grey-brown, the female is very cryptically coloured and blends in very well in the forest where she nests. Not so well camouflaged, however, when she comes out of the forest into a grassy area to feed.
Click image to enlarge.

One approached so near, I was able to get this close-up. 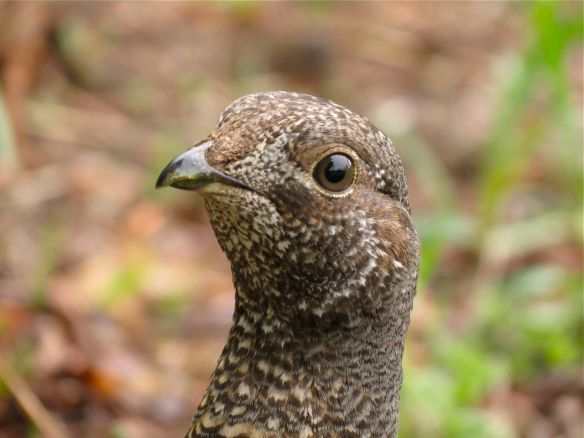 Birders affectionately call all members of the grouse family “chickens”. The picture above shows the family resemblance, and they are indeed in the same bird family, Phasianidae.

Like many species of grouse, the females, which incubate the eggs, are cryptically coloured. The males, on the other hand, have spectacular displays and showy plumage that they use to great effect in the breeding season to attract the females.

This morning, a single male was hooting and displaying in a Douglas Fir along the trail. Silhouetted against the sky, it was difficult to photograph. However, last spring I was lucky enough to have a close encounter with displaying male, which came down to ground level because he was so absorbed in his attempts to attract a mate. 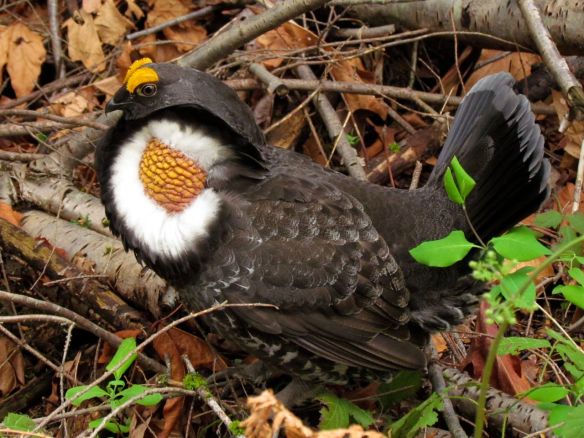 Displaying male Sooty Grouse. Note the inflated air sacs on the neck, which are involved in sound production, and the raised “eyebrows”.
Click image to enlarge

Here’s a close-up of the head of a male – quite impressive! As he makes his sonorous hooting, he flexes his erect tail in synchrony. Click here to listen. 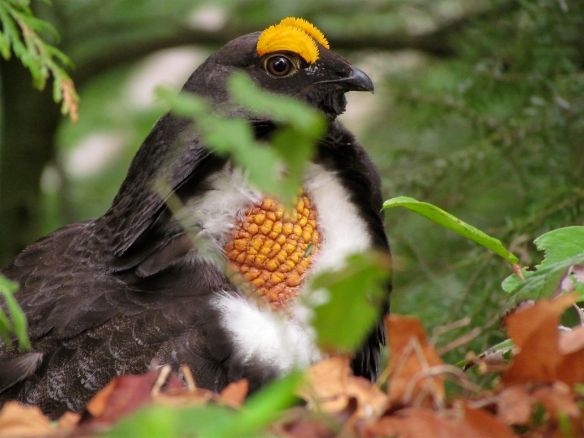 So whether it’s migrant or resident birds, Burnaby Mountain has lots to offer the interested observer at this time of year.

And the views are spectacular too.