There is always a small flock of gulls that spend the winter on the beach around the children’s playground at the east end of Deer Lake, but this year more than the usual number has shown up, and they’ve been joined by a rare visitor from the Arctic.

Gulls winging into the beach at Deer Lake

The birds come and go over the course of the day, but at times this month I’ve counted up to 300 on the beach and out on the lake – a good number.

Adults and immature (the brownish ones) gulls on Deer Lake beach.

They come to the beach for a couple of reasons: one, they like to bathe and clean up their plumage at the mouth of Buckingham Creek where it flows into the lake over a gravelly bar. And two, because people come down to the lake to feed the ducks, often with the kids in tow, the gulls hang around to grab their share of the handouts. Of course it’s against park rules to feed the wildlife, but the happy result for us is that the gulls get quite used to people, and it gives us the chance to see them up-close and personal. And to identify gulls, good close looks are preferred. 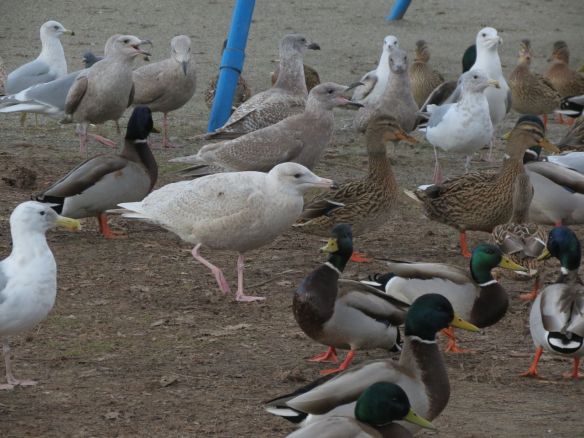 If you take a close look at the flock, you’re likely able to pick out the one that is a little larger than the others, and looks a little different too. There are other brownish gulls on the beach, but the washed-out looking bird in the centre of the picture above is the Glaucous Gull, our rare visitor from the Arctic.

Here’s a close up.

So what makes this one different? Isn’t it just another gull? Firstly, it’s large, and it’s by far the palest looking immature bird on the beach. There are other brownish birds, but this bird is basically a dirty-white overall with light brown markings on the back and wings. Its wingtips are virtually white. It has a large, heavy bill which is quite strikingly bi-coloured, pink at the base, and black-tipped.

When Glaucous Gulls do show up in British Columbia it’s mostly as single birds. They are usually in their first or second winter of life, and our visitor fits this general pattern. The Deer Lake gull is a first winter bird. Glaucous gulls are among a number of large white-headed gulls that take four years to reach adulthood, and acquire their full adult plumage. This one has three more years to go.

The bird below is also a white-headed gull, but it’s quite a bit smaller than the Glaucous Gull, and takes three years to reach adulthood.

I think the Ring-billed Gull is quite a nattily handsome bird and is the species most frequently seen down at the lake, and fortunately is also very easy to identify in adult plumage. The combination of grey back, black wingtips with white “mirrors”, yellow legs, yellow eyes, and a bold black ring on a yellow bill is diagnostic. This one is still in winter plumage shown by the dusky flecking over the head and neck. These brown feather tips will wear away over the course of the winter to leave a pure white head ready for the breeding season.

Gulls are difficult group of birds to identify, and I usually recommend for casual or beginning birders to leave them until later. Start with easy stuff. However, some birders get  “into” gulls in a big way; they get captured by the complexity of identification and the excitement of finding the rarities among the commonplace. However, it’s a challenge. The birds have different plumages in each year before they reach adulthood, with the immature birds being the most challenging to sort out.

As adults, most gulls show a combination of white head, neck and body, grey back or mantle, and dark wingtips with white “mirrors”. Many of the differences among species are subtle. And to cap it off, gulls of different species frequently interbreed, producing all sorts of hybrids with features of two different parents making identification even more difficult. There are lots of hybrid gulls in the Deer Lake flock. Here’s just one example below.

I could go on and on about gulls, but I fear my audience will soon be mimicking the yawn of the Glaucous Gull below.

Glaucous Gull centre and Glaucous-winged Gull to the left front

However, one final suggestion for a common and easy-to-identify gull is the Glaucous-winged Gull shown on the left above. It’s a large gull, yellow billed, pink legged, and with a pale grey back and grey (not dark or black) wingtips with white mirrors. If the grey coloured wingtips match the colour of the back, you’ve got a Glaucous-winged Gull.

Glaucous, by the way, refers to the grey colour of the adult birds’ back, and wings. Adult Glaucous Gulls have white wing tips.

Gull numbers at the lake will drop steadily from now on. The Glaucous Gull will likely head back north, perhaps to Alaska. It won’t breed for another three years, and when it does, it will do so on Arctic breeding grounds. The Ring-billed Gull will head back to its breeding grounds that stretch across central BC, the Prairies and all the way across the country to Newfoundland and Labrador. The Glaucous-winged Gull breeds here on the BC coast, in Washington State, and right up to Alaska and the Aleutian Islands. It is our commonest year-round gull in Metro Vancouver and the Georgia Basin.

So you’ve hung in this far, thank you for your persistence. Gulls are not everyone’s idea of a fun topic. I’ve not posted for a while, but life just gets really busy sometimes. I plan to be posting more regularly as we head into spring. There’s lots to see and enjoy in our parks. Next up are Wood Ducks, our dandiest ducks.