It’s All Hallow’s Eve. Gore-spattered ghosts, ghouls, and goblins roam our streets in packs.  Vacant eye-sockets glare at us from dark doorways, and dripping bushes. Blood curdling wails of pain and screams of fear echo through the neighbourhoods.

Putting the frighteners on ourselves is all part of the fun, and the scary stuff is not that nightmarish when we know that once all ‘tributes’ have been collected, a warm home awaits us with hot chocolate and a feast of goodies.

However, from our comfy seats at home, can we give a thought for the lowly snail? If snails could think like we do (they don’t) surely their Halloween Nightmare would be one that would terrify us too – trapped, unable to move, and being eaten alive, head first, Hannibal Lecter style.

And that’s what’s happening below; not in the movies, and not in our imaginations, but for real. 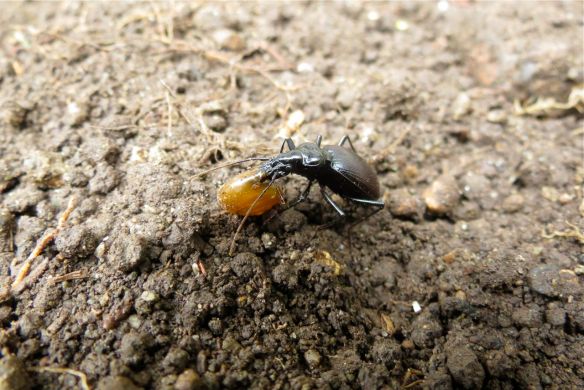 With the beetle’s mandibles plunged into the opening of the snail’s shell, the hapless gastropod is being eaten alive, head first. I witnessed the dramatic scene above while gardening this week .

Ground beetles, like the one above, are quite common carnivorous denizens of our gardens. Often unseen because of their nocturnal habits, we frequently disturb them while digging around in our gardens. Far less frequently do we see them with their prey.

However, it’s a good reminder that many of the invertebrates in our gardens are actually doing us favour, although I’m sure the snail wouldn’t see it that way. In this case our friendly beetle is consuming a garden-plant-eating snail. Remember: Don’t squash the insects, and do avoid the pesticides!

The two hard “shields” covering the back of the beetle and protecting the wings underneath are called the elytra. They are nicely striated in the above specimen, and suggest that it’s in the Calosoma genus. As I’m a bird man, and less of a bug man, my identification of the beetle is provisional.

And while I’m on the topic of ground beetles, I thought I would take the opportunity to share a picture of another striking member of this large family of insects. I managed to photograph this beauty last year in my garden after a brief shower left it with a shiny coating of water over its smooth, red elytra. Again, my identification is provisional. I believe this one is a member of the Carabus genus.

Carabus ground beetle after a rain shower.
Click to enlarge

Take a close look at the beetle above and you’ll notice it’s missing part of its left front leg, and part of its right antenna.  It’s an eat-and-be-eaten world all around us. So if snails could have Halloween nightmares, then I’m certain that ground beetles would have theirs too. Who can imagine what frightening beasts could attack and dismember ground beetles?