So what about that header picture? In that pose on my garden feeder, the Pileated Woodpecker looks almost prehistoric. Easy to imagine the connections to its ancient, dinosaur predecessors. Found throughout Burnaby, this largest of North American woodpeckers nests in the forested areas of our parks, and frequents our yards, especially if we’ve got trees in them.

And it’s noisy too; often announcing its arrival with a loud wuk, wuk, wuk, wuk, wuk. Now , take those ear pods out when you’re walking; you could be missing something.

Compared to the feeder shot above, here’s a more typical view of the bird. This one’s a female. The header picture is a male. 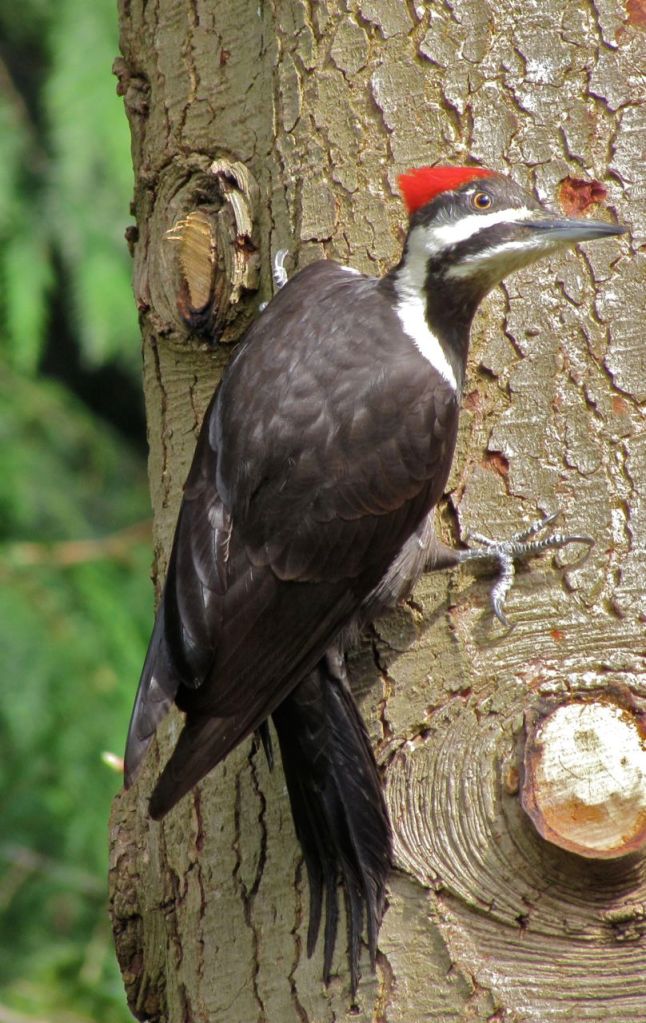 See the difference between the sexes? The male has a red moustache, the female black. 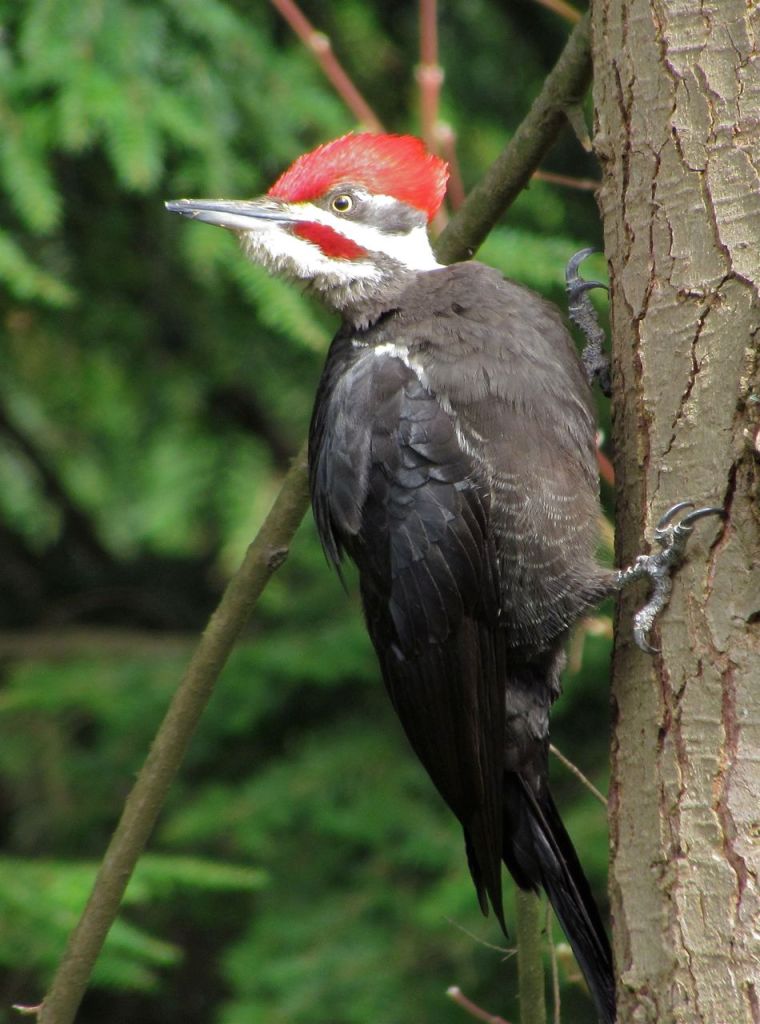 At this point, I can perhaps guess what some of readers might be thinking. ‘Are these the guys that hammer away at my chimney or metal roof vents in the spring?’ Well maybe, but it’s more often the Pileated’s smaller cousins – Northern Flickers and Downy Woodpeckers. Smaller you say? Just as well. But before you express too much irritation at these early morning rude awakenings, have some sympathy for the poor woodpecker. He just doesn’t have what it takes to sing! Without the specialized structures in his throat that songbirds use to produce those soothing, gentle sounds, he has to turn to drumming to claim his territory. A beautifully resonating metal vent is often preferred over plain old wood. The better the resonator, the louder the drumming, and the more intimidating to would-be interlopers. I’ll write more about this in later posts about woodpeckers.

I’m sure too that some of you may be saying: ‘ I don’t think I’ve ever seen this bird. How could I miss such a large, noisy woodpecker?’ Well, they’re not noisy all the time. In fact they can be remarkably elusive at times, but they often leave clues that they’re around. Take a look below at the 8m high stump of a storm-broken western hemlock photographed in Deer Lake Park along the forested trail up in the south-east corner of the Park . 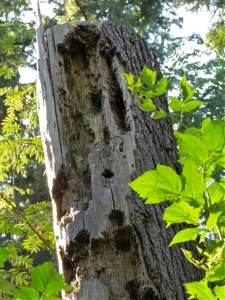 When Pileated Woodpeckers start working a tree to extract carpenter ants, a very important food for them, they make these unique, large, rectangular holes. You may not see the bird, but the evidence is right there that they’re around. If it’s a freshly worked tree, you’ll see the very large woodchips at the base. Come back later, you may see the bird at work. Approach slowly and quietly. They can be fairly tolerant of being approached; just avoid sudden movements, and use your David Attenborough voice!

Tapping into our woodpeckers will return later with more about our local tree drillers. Wuk, wuk, wuk!

Click here to listen to a series of calls, and drumming sounds from this stunning bird.