Even though I usually restrict this blog to Burnaby outdoors, there’s such an exciting story happening right now in New Westminster that I’m briefly stretching the Burnaby boundaries to encompass our Royal City neighbour. For the purposes of this story, New West becomes honorary Burnaby.

If you rush down to Queen’s Park right now, you can find a one of the rarest birds ever to show up in Canada. In fact, the Red-flanked Bluetail has never been seen before in Canada until yesterday. A single bird like this usually results in a flock of birders coming to see it. And they were arriving from around the Lower Mainland and Fraser Valley in flocks this morning.

And they were all here to see this:

But there’s a big backstory here. Last night I received an email from a birding friend who had seen a bird on Sunday morning that he just could not identify. Could I help suggest what he may have seen? If Colin couldn’t identify what he’d seen, I knew it had to be something really special. As soon as I read his notes and looked at his field sketch, I thought I knew what he’d seen. And the last ones of this species I had seen were in Japan! A quick flick through one of my Asian bird books confirmed my thinking: looks like a Red-flanked Bluetail. MEGA sighting. I sent the information off to another birding buddy who confirmed my hunch.

But, now we had to confirm the bird’s identity by finding it again this morning, and getting some photos if possible. And you know what the weather was like this morning – black ice and snow. I couldn’t believe it, on this of all mornings. The Birding Gods were seemingly against us.

I arrived at the children’s playground, just north of the petting zoo at daybreak – except day wasn’t really breaking, although my heart nearly was. Just the dimmest of dawns was struggling to emerge under dark skies and through steady snow. However, a movement caught out of the corner of my eye had me searching through the gloom. Nope – Song Sparrow. Then another movement, and HERE WE GO – an unmistakeable profile, but no plumage or other details visible, and just a struggle to track the bird as it flitted from tree base to tree base.

I couldn’t get a photo – too dark, the bird was too active, and where are the rest of people who should be here by now? A few better looks with some colour and detail were followed by guess what? Not only had my birding buddies not appeared, the bluetail had disappeared, and I still hadn’t had a really a good look to absolutely confirm the identity. It’s times like this that a birder’s stress levels really rise.

After half an hour of careful but frantic searching, my birding buddies appeared, but still no bird. And then, as though materializing from the snow itself, there was the bluetail. The light was better, the bird was close, and we could confirm the identity after finally getting a good look at the diagnostic white throat. Better still, Sharon’s a photographer too, and we got our confirming pictures for the record.

A couple of hours later the local birders were truly flocking in. We’d put the word out. An amazing number of people, it seems, had trouble getting to work this morning because of the roads, but the New West roads were magically much easier to drive, and people’s illnesses seemed very short-lived. Hmmm!

Let’s hope our tiny visitor from Asia hangs around a while longer. The word is flooding out across the birding universe, and visitors will no doubt be arriving from across the continent in the days ahead to see this ultra-rarity.

In the conditions this morning, my photos were poor. But here’s a couple more to round out the story. 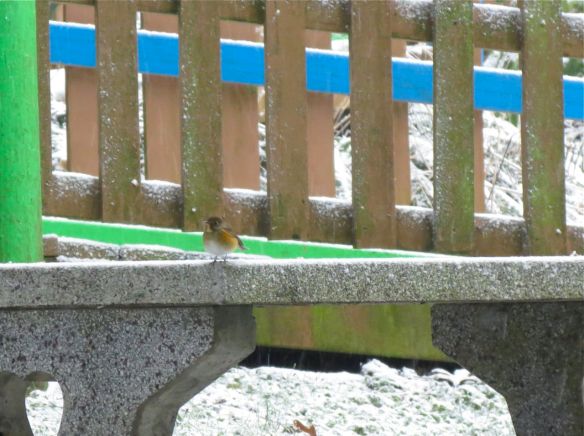 The bird looks extremely healthy, and is finding lots to eat. It consumed a large worm or grub while we watched, and it seems to be able to find insects, even in these conditions.

To find the bird, park or walk into the parking area at 1st Street and 4th Avenue. Head to the left into the forested North West section of the park. Look for the other birders, or look around the forest behind (west) of the children’s playground. The bird flies low to the ground , rarely going as high as 2 meters. Good luck.

For a much better pictures check out the following: